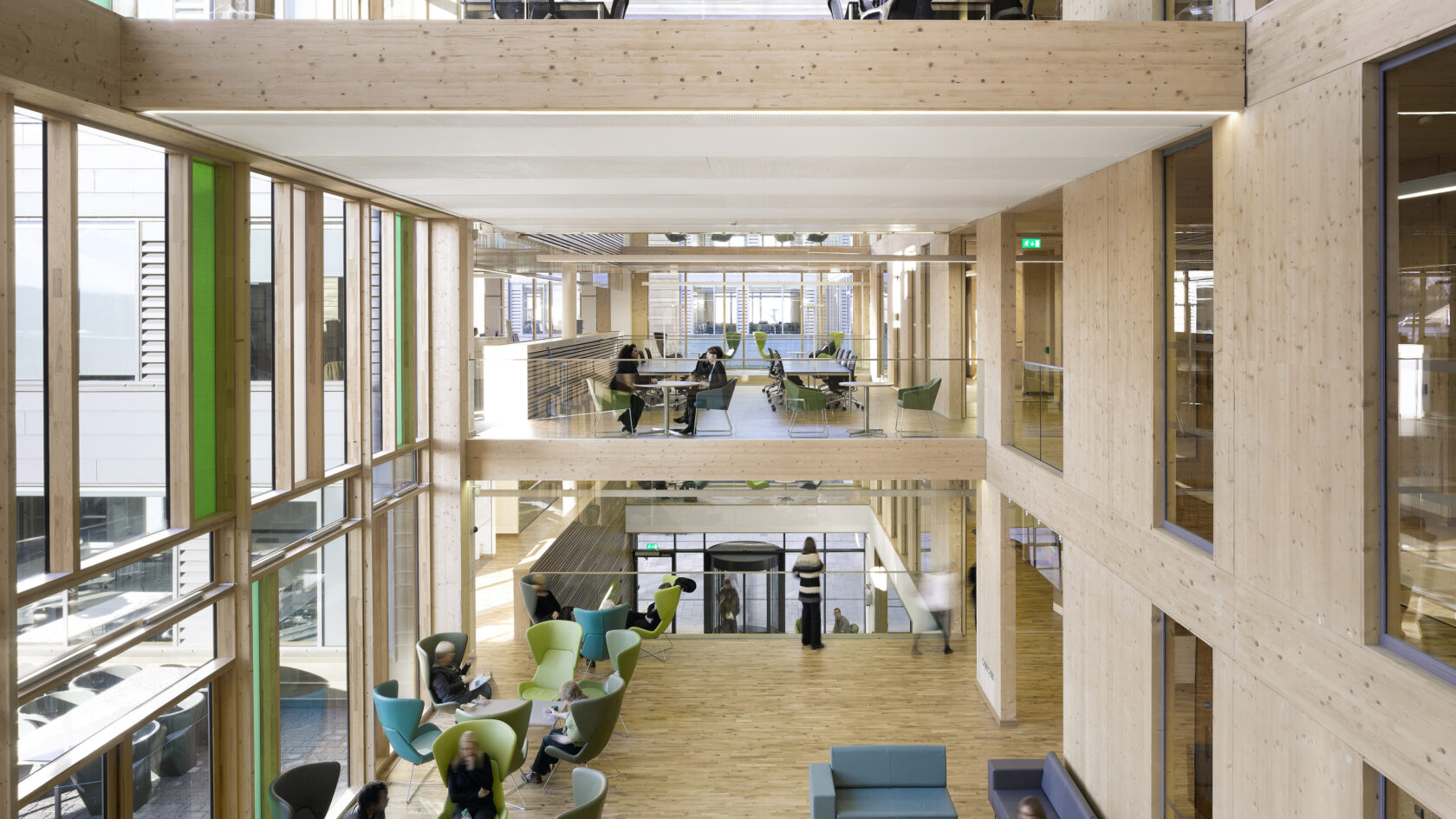 Keynsham Civic Centre was completed in 2015, replacing dilapidated 1960s buildings to provide 68,000 sqft of council offices, a library and information centre, 20,000 sqft of town centre retail space, two new pedestrian streets and a new market square. The project was a test case for an innovative approach to delivering exemplary building performance and is a truly sustainable building. At the heart of the project was an ambitious DEC A target. 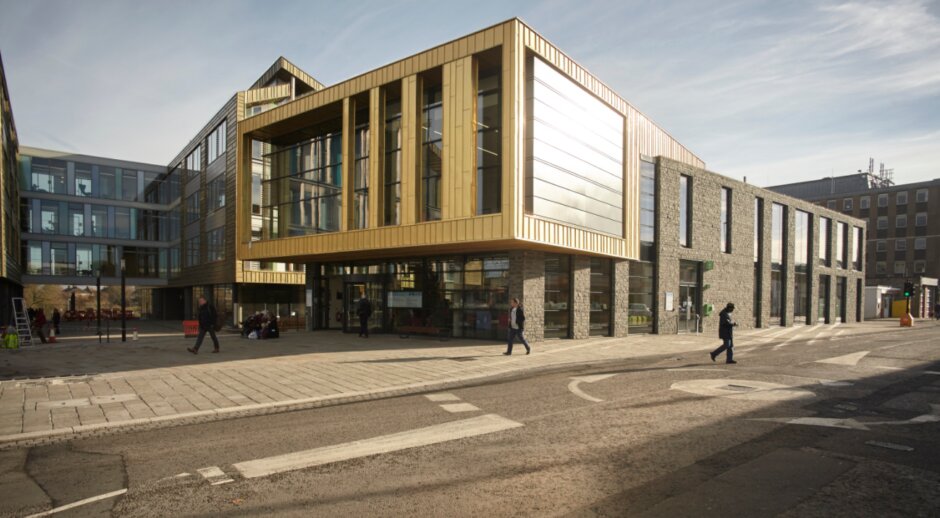 From the outset of the project the client, Bath and North East Somerset Council, was determined that the centre would achieve outstanding building performance and be resilient to changes in climate and use. Max Fordham as MEP, Sustainability and Acoustic Consultant worked with the client and design team to develop a pioneering environmental strategy for the project: it was the first in the UK to implement BSRIA Soft Landings to target an exemplary DEC A rating and included a two-year aftercare period. The DEC rating, as an "in-use" target rather than design aspiration, could not be manipulated to fit a sustainability narrative.

In order to allow a DEC rating to form a contractual element for the project, a means of allocating responsibility for each kWh of energy that could be used was developed. This tool, an energy tracker, set out all of the parameters that contributed to the building’s eventual energy use (building U values, occupancy times, number of cups of tea that were made etc.) with the split of responsibility for each, between the contractor and the end user.

A ‘passive first’ approach was taken to the architectural and services design, including orientation, daylight, form, ventilation, structure, acoustics and cooling. As the project progressed, the design was honed to remove unnecessary complexity in mechanical and electrical systems and to improve resilience. The design focused on making the building form and fabric work harder to achieve our goals, and omitted mechanical plant, which is costly to install, operate and maintain.

Daylight is provided by fixed glazed windows and natural ventilation is controlled using solid, insulated, openable doors formed within the window system. The natural vents have both manual and automatic elements and incorporate sound attenuation to reduce noise intrusion from the town outside. Daylight and natural ventilation are separated so that blinds do not get blown with air movement and acoustic baffles don’t block daylight. The automatic BMS (Building Management System) which controls the upper section of each vent, is used for daytime ventilation and night-time cooling and the manually-controlled lower level section is available for occupants to use as they see fit. The lower sections can be locked in winter allowing the BMS alone to control the ventilation rate, ensuring a sufficient fresh air supply without excessive heat losses. Narrow floor plans of c.15m were optimised for cross ventilation.

Split pitched roofs create a high-level “thermal reservoir” to help drive the passive stack natural ventilation, while the opening clerestory windows here are set back from the façade to shield them from the traffic noise and to provide daylight deeper into the top floor level. Roofs are also pitched south at 15 degrees to optimise the area and output of photovoltaics.

Voids in the floorplates allow the passive stack ventilation to operate across all levels and by being adjacent to the predominantly glazed north façade they also allow the daylight to penetrate deeper into the floor plate. 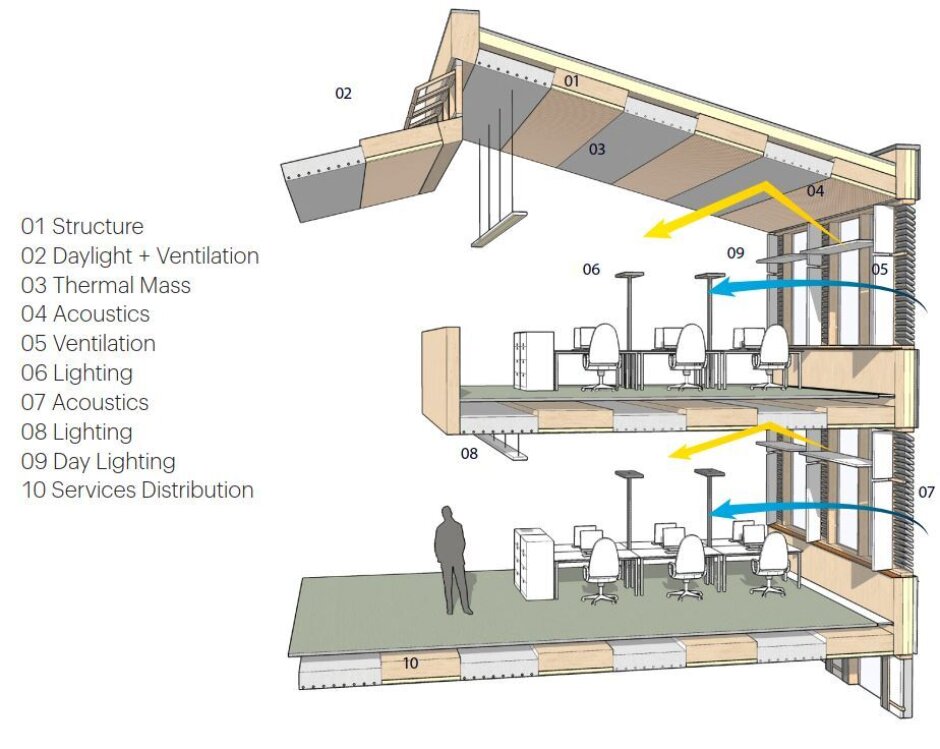 A pre-contract embodied carbon assessment was undertaken to help the design team appreciate the impact that the embodied carbon of selected materials had on the building’s full life-cycle carbon footprint. This helped the team to prioritise where to invest in low embodied carbon materials whilst achieving best value for money. The building incorporates an innovative hybrid steel and cross laminated timber (CLT) frame, with the upper floors of the offices constructed entirely using a CLT frame. The hybrid frame solution provided significant cost savings and achieved many of the sustainable benefits of a timber building with the structural efficiency of a steel frame.

In order to provide thermal mass to support the night free-cooling strategy, which reduces the cooling load of the building, 50% of the floor slabs were comprised of pre-cast concrete planks. The planks also incorporate embedded cooling pipework, which was a step taken to future proof the building against potential climate change and increases in occupation density. 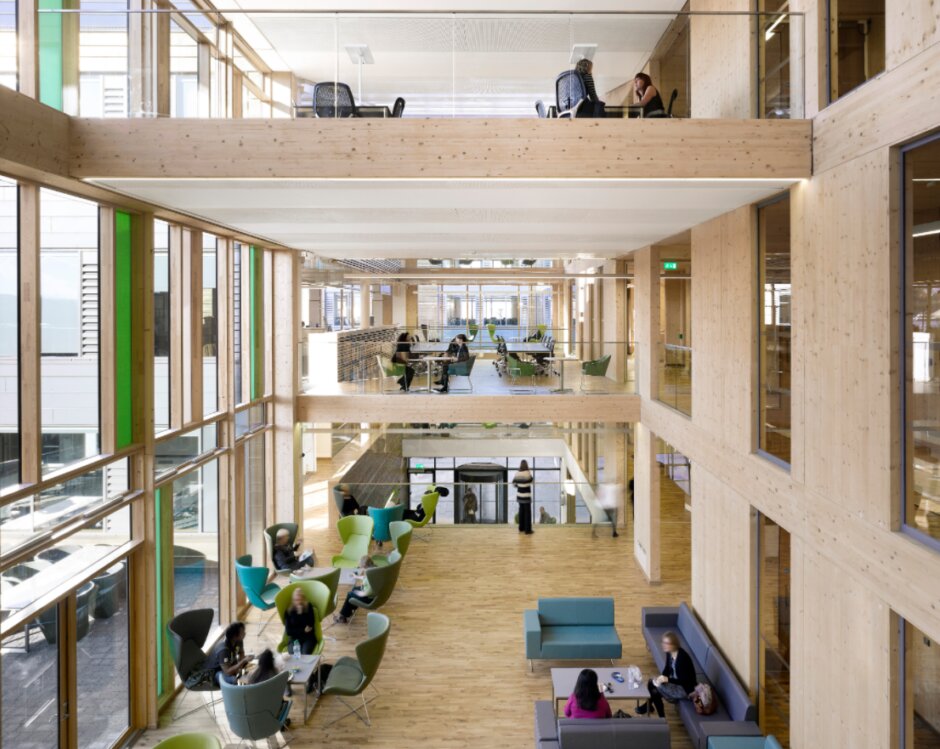 Up to 20% of the building's heating load can be provided from the ITC water-cooled servers by a water-to-water heat pump that simultaneously provides direct cooling to the servers. This maximises the overall efficiency of the heat pump installation, allowing the system to operate with a combined coefficient of performance (COP) of around 7. This means that for each kWh of electricity consumed by the heat pump system it can provide 7kWh of useful heating and cooling to spaces around the building. The building server load is concentrated in the thin client servers in order to maximize the amount of IT generated heat that can be recovered to heat the building.

The building has two separate heating flow circuits, one constant temperature (underfloor) and one variable temperature (trench) which allows the lower temperature flows from the servers to be used year round as required, even when the building requires a higher flow temperature (provided by boilers) to meet the peak heat loss. Additionally, the cold-water feed to the hot water cylinder is also pre heated by the servers. 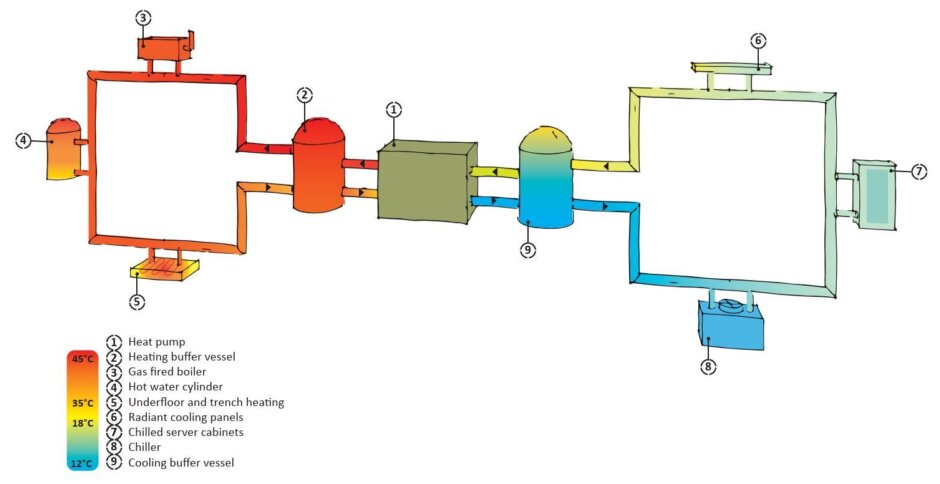 The control of lighting is of major importance to both the energy use and user satisfaction. The lighting to the circulation areas is automatically dimmed with presence control activation to provide 150 lux to all of the circulation areas, a number of wall lights will illuminate vertical surfaces to bring an uplift effect to the rooms and minimize any feelings of gloominess that the lower lux level could engender.

Lighting to the main work areas are individually controlled by the occupants and are provided in the form of direct / indirect floor mounted lights that are able to illuminate work areas from 150 – 500 Lux, to suit the particular task being carried out and user preference. This offers energy savings compared to standard industry practice of illuminating office space to a uniform light level of 300-500 Lux. Additionally, lights can be automatically switched off in groups, either when the daylight entering a particular area satisfies the demand for light or when the central “kill” switches on each floorplate are activated when the building is unoccupied. 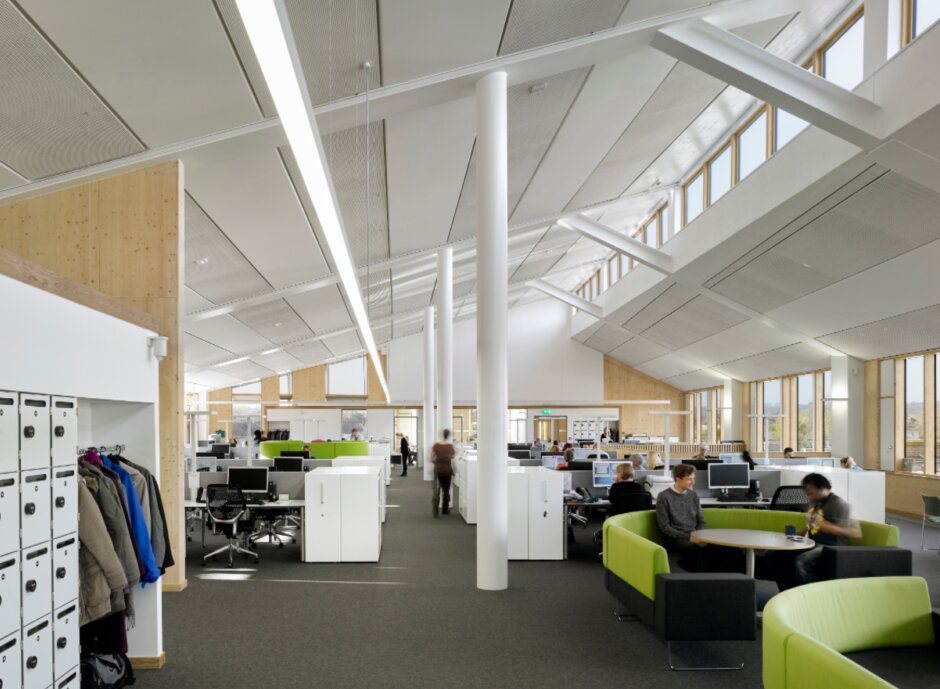 As part of the BSRIA Soft Landings process, the team engaged with the client’s facilities management team from an early stage to better understand occupant behaviour and operational needs, and to ensure that management factors could be considered early on in the design. An example of an output from this process is that out-of-hours use of workspace within the building is contained to a dedicated out-of-hours office suite.

The unambiguous target of the DEC A rating ensured that the project team could work together cohesively towards a clear and common goal, resulting in a more efficient and productive project, and a more resilient building. The teams were able to share data relating to building performance that would otherwise remain with the engineers or contractors.

The main contractor and their soft-landing co-ordinator have remained involved with the project until the present day, carrying out regular energy reviews with the FM team that help to identify where the building is not performing as expected when compared to the energy tracker. This regular feedback not only allows for any issues to be rectified it also provides guidance on what could be improved in future projects designs to avoid these issues.

A useful lesson learnt is the need to have robust systems that can still function when ‘clever’ parts fail. For example, there is an automated window opening system that helps to regulate the building temperature and provide fresh air. After handover, this system remained incorrectly commissioned into the early stages of occupation, but by having the ability to disable the system and rely on manual openings (that are weather protected) instead, the occupants remained comfortable and in control of their environments, until re-commissioning was completed.

This has since reduced as a result of ongoing finetuning and commissioning.

The building currently has a good DEC B rating, so while it has not met the ambitious DEC A target it remains a successful (in use) low energy building. It is believed that a DEC A is still achievable.

The Keynsham Civic Centre demonstrates the exemplar performance required of NZC “compatible” non-domestic buildings and showcases an approach to sustainable and low energy design from which current and future project teams can draw inspiration for achieving net zero carbon. 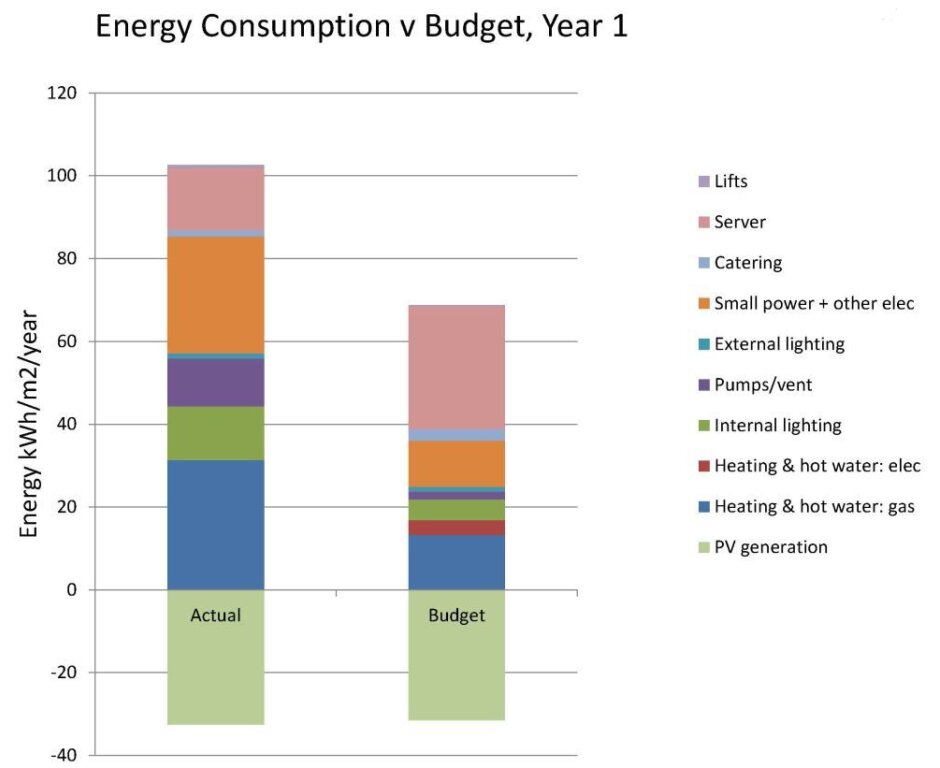 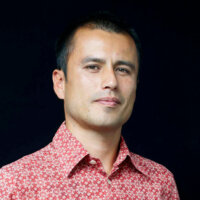